What makes this area a pike fishing paradise? Our water system is ideal for pike. Shallow waters and post-glacial rebound have created thousands of flads and gloe lakes, where pike spawn in early spring. The sun quickly warms up shallow waters and the juveniles begin their lives in an environment that offers good protection and an abundance of nourishment. After having grown sufficiently, the juvenile pike begin to expand their living area. Skerries that occasionally break the surface of water, and continue below it, create a greatly varied aquatic environment. Furthermore, abundant aquatic vegetation provides optimal habitats for pike. Rocky islands and small islets form excellent headlands and straits close to which pike wait for passing shoals of fish. Water here is clean as it is continuously replaced by the current running through Kvarken. Other fish, including large stocks or perches and roaches, also enjoy the brackish water (mixture of freshwater and seawater) in the area. As a result, pike's well-being is increased because nutrition is never in short supply. In summary, the optimal opportunities for reproduction in the clean and versatile aquatic environment, together with fishing ethics and respect for the catch, ensure an abundant supply of pike in the region. 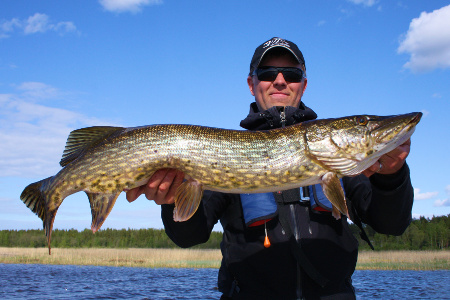 With spring, the days get lighter and lighter. The sun starts melting snow on the ice and sunlight reaches the water environment better than in the winter months. The pike get active with increasing light and warmth. In the Kvarken region, pike spawn in late April - early May. They migrate to spawn in shallow bays (flads) and gloe lakes. The spring is also the best time for angling big ide and bream.

When the bays get warm, the pike return to open seas, to shoals bordering to deeper waters, where the water flows more freely and stays cooler. There they lie in wait among rocks and weeds preying on fish swimming by. Big schools of perches can be caught in streams in the summer months.

As the days get shorter and cooler in the autumn, the pike start migrating again. They have to prepare for winter by feeding up actively. When the water gets cooler, pike return to shallower waters. They are now again accessible for fishermen on the shores. Autumn is the golden time for those who wish to catch giant pike. Fishing guide’s tips for catching pike in the autumn.

The time when t 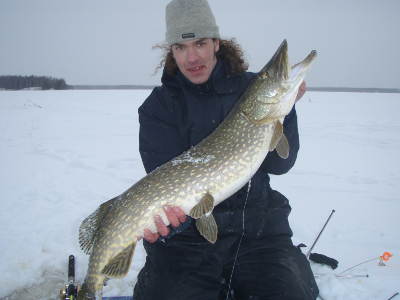 he sea freezes over varies from year to year. The ice puts a stop to fishing in open waters but you can still continue with pike fishing  -  under the surface ice. The pike feed less in the winter, but they have to eat something to sustain them and they do not hesitate to strike at an easy prey. In addition, we have some of Finland’s best ice-fishing spots for catching perch in this region.

The rambling and shallow Kvarken archipelago is an excellent environment for bait fishing to catch the northern pike. There are plenty of pikes in the area, and catching them is often very exciting and full of adventure.  You can also catch the ”big one” in this area, northern pikes weighing more than 10 kg.

When? The best bait fishing time is in May, immediately after spawning, and in the autumn when the water is getting colder.

Where? Weedy bays close to or at a medium-range to the mainland, wide and open inland waters, and estuaries.

How? If you know where the northern pikes are, you can angle from the shore or from the anchored boat and offer bait with a feeder or a waggler. In wide and open inland waters, the best way is to angle from a slowly moving boat as this gives the opportunity to search for fish in a wider area. Roaches, carp breams, and big herrings provide the best baits.