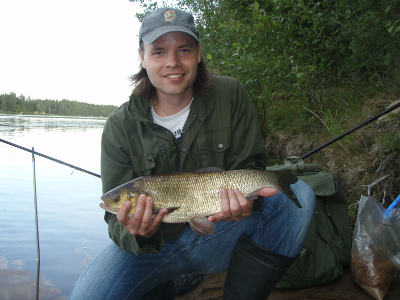 lago is known for its rich ide population. The average ide weighs, in many places, over 1.5 kg and it is not rare to catch one that is over 2 kg. The largest ides caught by angling in the Kvarken region have been over 3 kg.

When? The last two weeks in April are usually the best ide-angling time in the spring, as the ides then gather in large schools to spawn in fast-moving waters.  The second top-season for ide-angling is in July-August when the ides move in large schools, searching for prey, in the archipelago and quiet backwaters in rivers.

Where? Straits, shoals, and bridges by currents and streams of the archipelago, and in the rivers Lapväärtinjoki, Tiukanjoki, Kyrönjoki, and Perhonjoki, including their lake basins.

Methods: You can angle for ides in many ways: with waggler, feeder or whip – choose the method according to the venue. Large worms and corn kernels provide the best baits.

The most abundant car 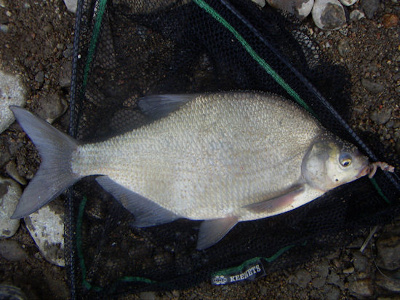 p bream populations live in rivers and estuaries. The average carp bream rising upriver weighs 1-2 kg but there are also some really big breams. For instance, in the Kyrönjoki estuary carp breams of more than 3 kg are quite common and several 4 kg ones have also been caught.

When? Carp breams start migrating upriver to spawn immediate after the ides. The busiest spawning period is around mid-May, a perfect time for the angler to be there. After spawning, most of the breams return to the sea and can then be caught in the river estuaries. Some carp breams spawn in the sea, in shallow weedy bays, sheltered by the islands. These breams are slightly bigger than the ones in the rivers, but catching them is by far a bigger challenge.

Where? The rivers Lapväärtinjoki, Tiukanjoki, Kyrönjoki, Lapuanjoki, and Perhonjoki and its lake basins. There are good carp bream populations in many rivers between the upstream bars, and breams can be caught there throughout the year. In the archipelago, large weedy bays are the best bet for catching carp breams. 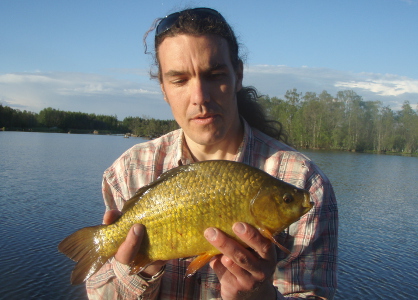 y of small bays in the Kvarken archipelago, where fish migrate to spawn in the spring. These bays, connected to the sea by one or more inflows, are called “flads”. Most of the flads have large crucian carp populations. Pikes and perches, which populate the flads in summertime, keep the smaller crucian carps in check, and only the bigger ones are left untouched.  Generally, there are not many fish but their average weight is quite good. The biggest crucian carps caught in flads have been well above 2 kg.

When? You can angle crucian carps throughout the summer, but the dark August evenings are usually the best time for a good catch.

Where? Lagoons and sheltered inland bays of the archipealago.

Methods: The crucial issue is to find the fish and offer the bait in as tempting a way as possible. Crucian carps are very cautious and the slightest disturbance makes them disappear. Many experts consider angling for the big crucian carp the most difficult type of fishing. It is, however, exciting and getting a fish that is hard to catch is very rewarding. If you want to face up to a challenge, this is the one - catching a big crucian carp in a flad.

This species is generally found in shallow weedy bays up to the height of Vaasa. About 20 km to the north of Vaasa, is the northernmost place in the Gulf of Bothnia were the common rudd can be found.

Bream is bound around the islands close to the mainland and in the estuaries. This fish, resembling small carp breams, are often caught in rivers while angling for the carp bream.

Dace is often caught when angling in the lower reaches of the Kyrönjoki River. It can be caught throughout the summer, up to September.