The European perch is the most common catch that an angler will get in the Kvarken region. It is found almost everywhere: in the sea, ponds, brooks, and rivers. Kvarken’s vast and varied archipelago is one of the best perch fishing places in Finland. Waters here are clean and there is an abundance of nutrition. This allows fish to grow big and stocks to remain large. In other words, the perch population is rich and the fish are large. Perches of above 1 kg are caught every year, and the half-a-kilo ones are quite common.

Perch bite nearly throughout the open-water season but towards the end, they get less active before the waters freeze. The biggest perch are usually caught in August-September.

Where? Rapidly moving straits and bridge openings and the edges of shoals and rocks. 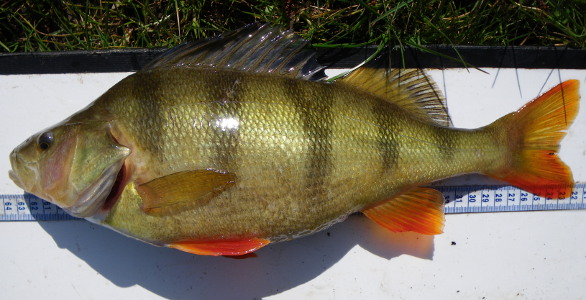 The high season for perch jigging begins at the end of July, when waters are warm and the perch begin to form shoals. The season heats up until the end of September and continues until the waters freeze over. Perch jigging can also be done after spawning season in the spring, near the spawning areas. The spring season is short and only lasts for a few weeks. As waters warm up in the summer, you can look for perch in warm shallow bays and places with a strong current.

Summer: Finding perch is more challenging in early summer, than later in the season. Perch is often found in shallow, warming bays and, when waters are warm, in places with a strong current. You may find a good catch if you focus on areas with a current, under bridges and in narrow straits, and if you fish in the mornings and in the evenings.

Autumn: In late summer and early autumn, perch begin to form shoals and collect nutrition for the upcoming winter. Shoals of perch move from deep waters to shallows, underwater hills and places with a current. On late summer evenings perch shoals can be located in shallow water near the shoreline, where they splash while hunting for shoals of small fry.

A nautical chart and sonar are a great help in looking for fishing grounds. A nautical chart is used to identify suitable areas, and sonar helps to pinpoint the exact location on approach. The best underwater hills rise from a depth of over ten meters to 8-5 meters. For jigging, the most suitable seabed is hard and without vegetation.

A jig consists of a head sinker and a silicon body. Sinkers are used to determine the jig’s sinking speed. A deep current requires a sinker that is heavier and sinks faster than those used when fishing in shallow waters. The weight of sinkers suitable for fishing in Kvarken typically varies between 5 grams and 25 grams, depending on depth of water and strength of current. The size of the hook is determined by the size of the silicon jig. There are several different types of silicon bodies for the jig. In Kvarken, fishermen typically use larva, fish and worm jigs. The most popular jig colours are motor oil, red, brown, green and blue. It is difficult to find a correlation between jig colour and weather conditions. Trial and error will provide the best colour for each situation.

Technique: Cast the jig in the desired location and allow it to sink to the bottom. You will know that the jig has reached the bottom when the fishing line slackens. A basic technique involves reeling in the line by a few rotations after which the jig is allowed to sink to the bottom again. The jig is moved up and down until a fish takes the bait or the jig goes under the boat. When a fish bites, you feel a sharp pull. This should be countered by a sharp pull from your end to hook the fish. If you find a feeding shoal, you may get a good catch in a short space of time. After the fish has been pulled into the boat, it should be stunned with a sharp blow between the eyes and bled by cutting the throat with a knife to sever an artery. If you decide to release a fish back into the water, it should be done without touching the fish.

Permits: Perch jigging requires payment of the state Fishing Management Fee and either the Western Finland Provincial Lure Fishing Fee or a fee to the local fishing association.